Posted on November 20, 2016 by thedarklingwoods

by Elisa from Flower Face

I have been stalked by owls for a long time now.  The first time I stumbled upon one was about four years ago.  I was investigating a community garden near my home and it happened that there was a male and female burrowing owl (Athene cunicularia) near it.  This type of owl lives and raises their young in abandoned mammal burrows.  I watched these owls and photographed them for many years.  Then miraculously, in a crack in the ground right across from my house, another one made an appearance.  Somehow this bird widened the crack into a hole and raise a brood of young owls last spring. 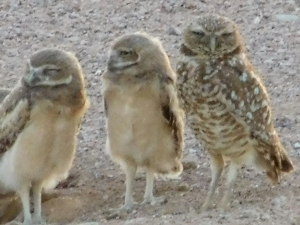 I have watched these animals  and found that they are resourceful, passionate, and despised by other birds.  They are avid night hunters who sometimes bring birds half the size of themselves back to their burrow.  They have elaborate mating rituals with unique calls, dances and displays.  I have also seen other birds pester and annoy burrowing owls.  Once I even observed a hummingbird flying wildly around an owls face and chattering.  The owl remained unruffled and stared past the hummingbird seemingly unaffected.

I had to ask myself, what do all these owls mean?  What am I supposed to do with owls?  Do they have a message for me or are they calling me to work with some deity related to owls?  There happens to be a wonderful Welsh goddess Blodeuwedd who seems to fit the bill.  On the surface, her story is one of an adulterous wife, but look further and she echos freedom, sovereignty, and liberation.

In the Welsh legend, Blodeuwedd’s story is told in rich detail. This legend is as much about Blodeuwedd’s freedom as it is about her husband Llew’s struggle for kingship. The Goddess Arianrhod, Llew’s mother, tried to prevent Llew becoming king by cursing him to be unable to receive his name, and his arms unless she gave them to him.  In addition, he could not marry a mortal woman.  This rendered him powerless to become king.  Fortunately for him, the magicians Math and Gwydion took pity on him and fashioned a bride for him out of Oak, Broom, and Meadowsweet. She was called Blodeuwedd or Flower Face.  This may be the ancient name for owl as the feathers of the owl make a flower type pattern around the eyes.  In any case, she fulfills his requirement for marrying the land as she is made out of the flowers of the earth.

Unfortunately, however, Blodeuwedd does not have a say in any of this and is never asked if she wants to marry Llew or even if she loves him.  As it happens, Blodeuwedd is left in the castle one day and meets Gronw Pebr as he is out hunting and falls madly in love with him. They conspire to murder Llew in order to remain together.  Llew has a bit of magic protecting him, however.  He can only be killed under certain conditions.  Blodeuwedd tricks him into divulging the unlikely circumstances and Gronw throws the prescribed spear.  Llew doesn’t die but he turns into an eagle and flies away.  He is later nursed back to health by Math and Gwydion.  The two lovers are ultimately tracked down.  Gronw is killed by Llew and Blodeuwedd is turned into an owl by Gwydion, cursed to live a solitary life.

Given the circumstances surrounding her creation, Blodeuwedd was only fashioned to fulfill a requirement for Llew. Her thoughts and wants were not even considered. Some see her betrayal of her husband as a way that Llew could experience death, healing and rebirth, common requirements of kingship in Celtic legend.  Still others see her betrayal as a decision that ultimately leads to her liberation and freedom. In the book Flower Face, published by Ninth Wave Press, Blodeuwedd is seen as a Sovereignty Goddess empowering us to find our own freedom.  She also embodies the light half of the year in her flower aspect and the dark half of the year as an owl.  I personally love this portrayal of Blodeuwedd and highly recommend this book. It also contains songs, poems, prayers, and artwork dedicated to Flower Face.

My relationship with the owls and Blodeuwedd is just beginning.  I envision a twisted path of self discovery and liberation that will undoubtedly lead to wisdom.

Here are some wonderful links to everything Flower Face.

Flower Face: A Devotional Anthology in Honor of Blodeuwedd

← Moon Magic
Resurrection of the Meadow →